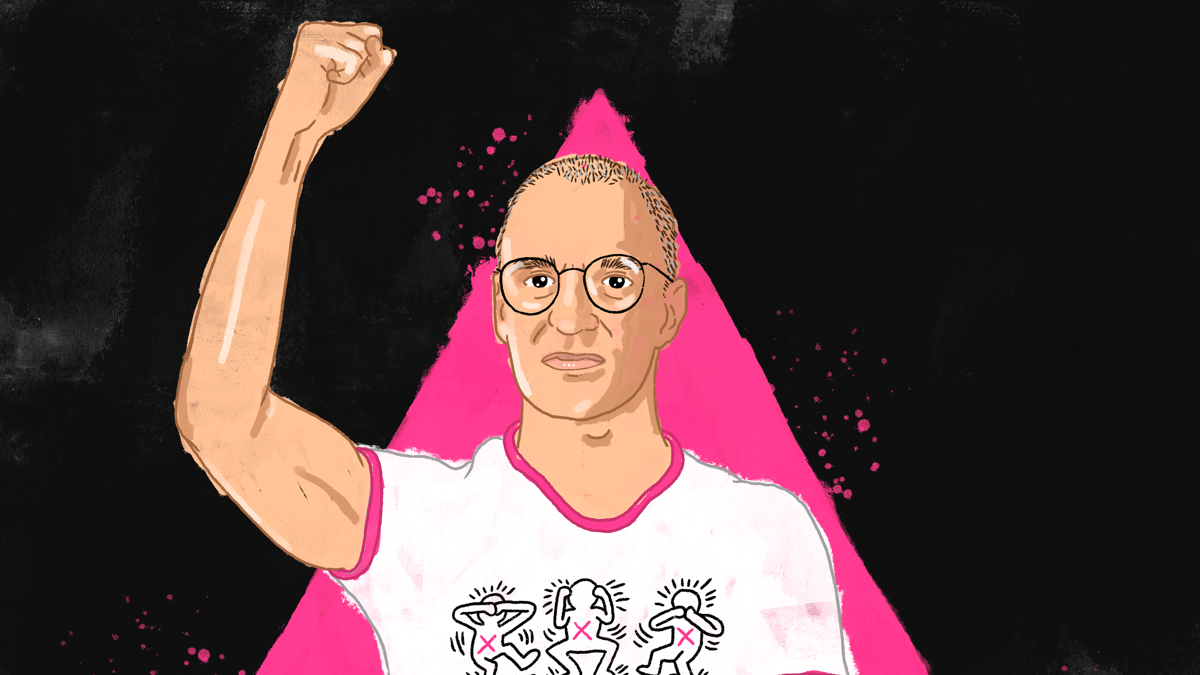 David Drake, who serves as the artistic director of the Provincetown Theater, is an Obie Award-winning playwright and per­former. His 1992 solo show The Night Larry Kramer Kissed Me, which chronicles a gay man’s experience of self-discovery during the height of the AIDS crisis, was produced off-Broadway, around the world as well as made into a feature film. Drake wrote this tribute to writer and activist, Larry Kramer, who died on May 27. Kramer's play The Normal Heart, sparked Drake’s own work of artistic activism and “kissed” him with the gift of political awareness. Here, Drake remembers how it all started.


On my 22nd birthday, June 27, 1985, the night Larry Kramer kissed me with his play The Normal Heart, I scrawled these words into my journal:

That shot through a loose-cannon mouth
and exploded my soul
into a thousand teardrop deaths;
leaving my eyes bruised
from the damp fingerprints
off my Public Theater Playbill,
and from the cradling palms that smeared
my snot-run-face
with black
ink
blood

Five years after I’d seen The Normal Heart, our lives would become forever intertwined. That’s how The Night Larry Kramer Kissed Me began.

It was a sort of “poem” that poured out of me (and on to about five pages of that journal) shortly after I’d found myself selling T-shirts in the ACT UP booth on Gay Pride Day 1990 with him. The Man. Larry Kramer—who, during a brief exchange we found out that our birthdays were only two days apart. With that discovery, he reached over and gave me a sweet brotherly “Happy Birthday” kiss.

At that time in New York City, gay men were dying of AIDS every day. My friends were dying. I’d found myself in ACT UP (the AIDS Coalition to Unleash Power) driven by the necessity of saving lives. With no political or medical expertise to offer, I ended up working the merchandise table during ACT UP meetings, and joining street demos. (Though I had been given excellent civil disobedience training, sadly, I was never arrested.) All I really had to offer was that I was an actor. So, once that “poem” sprang from my subconscious, I began writing little solo pieces to perform at AIDS benefits. That’s where the nine monologues that eventually comprised the arc of my one-man play The Night Larry Kramer Kissed Me came from. Like The Normal Heart had once been for Larry, The Night Larry Kramer Kissed Me became my sword.

For over five years, in a very personal battle to defeat AIDS and homophobia, I wielded it on stage around the world—with a year off-Broadway, an international tour, a feature film and, for non-English speaking actors, translations into four languages. Independent productions performed by others combined, The Night Larry Kramer Kissed Me has been produced in 23 states, 11 countries, five continents.

I never set out to do any of this.

I was a work-a-day actor when I scribbled those words into my journal, happy to land a theater job and step behind the mask of a character. I never set out to be a writer, or an activist, or appear on Phil Donahue as an openly gay man, sending my family running for cover because they didn’t want to be associated with that “fag.”

Larry did that. But only because something inside me let him. It happened—this awakening, this “kiss”—the night I saw The Normal Heart at the Public Theater, shocking this 21-year old into consciousness.

Being inspired by a show is familiar to all of us who love the theater, but having a particular theatrical experience that actually alters the course of your life is something much deeper. Of course, this experience of The Normal Heart didn’t just happen to me. Not only did Larry’s playwriting embolden the scope of theatrical expressions in its era—Tony Kushner, Terrence McNally, Paul Rudnick, Paula Vogel—in huge and unexpected ways, The Normal Heart provided the sparks that lit the world’s destination for change both onstage and off.

The Normal Heart witnesses the story of the men who responded to the explosion of HIV by creating the world’s first AIDS service organization, the Gay Men’s Health Crisis—until then, I hadn’t realized how powerfully the stage could be used not only as a mirror of society, but also of its moment. What was happening on that stage in 1985 was happening right outside the Public Theater’s lobby doors on Lafayette Street.

It’s taken us nearly 40 years to grapple with unpacking AIDS and its vast medical, social and political ramifications. As I’m certain Larry knew till his last breath, we haven’t finished the job. There is still no cure.

When I got the first text on May 27 from a friend that simply said, “Larry… No. I’m so sorry, David,” I knew he was gone. Riding the waves of emotions that this inspirational father figure in my life—this internationally revered gay icon!—over the next few days involved tears, anger, gratitude, disbelief, reaching out to friends I hadn’t spoken to in years to cry, laugh and rekindle deep-rooted bonds. I’m also grappling with the feeling that, in Larry’s passionate and demanding eyes, we had failed. I had failed. Not only is there no cure for AIDS, homophobia still has the power to paralyze and kill.

But that's where transformation happens in the stream of grief—there remains a legacy to draw upon. Larry’s legacy: Turn the chaos of your emotions toward social injustice into action. This is a message I’ll carry to my grave—as will millions of others around the world.

It all started with a poem. That’s also true for Larry. The title of his masterwork comes from the pen of W. H. Auden, whose words in “September 1, 1939” inspire me to this day:

Important Persons shout
Is not so crude as our wish:
What mad Nijinsky wrote
About Diaghilev
Is true of the normal heart;
For the error bred in the bone
Of each woman and each man
Craves what it cannot have,
Not universal love
But to be loved alone.
All I have is a voice
To undo the folded lie,
The romantic lie in the brain
Of the sensual man-in-the-street
And the lie of Authority
Whose buildings grope the sky:
There is no such thing as the State
And no one exists alone;
Hunger allows no choice
To the citizen or the police;
We must love one another or die.