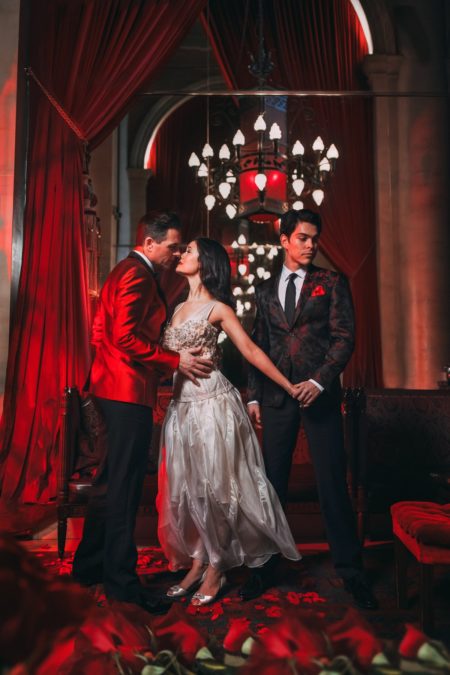 The Phantom of the Opera Is Here and 30! Looking Back at the Magic and Romance of Broadway’s Longest-Running Show

As "The Phantom of the Opera" celebrates its 30th anniversary on Broadway on January 26, Broadway.com looks back at the show's start and the secret to its success and shines the spotlight on its new trio of stars—Peter Jöback as The Phantom, Ali Ewoldt as Christine and Rodney Ingram as Raoul with a sexy photo shoot at Parker New York.

When The Phantom of the Opera opened at Broadway's Majestic Theatre on January 26, 1988, Andrew Lloyd Webber was already something any 39-year-old musical theater songwriter would kill to be: critic-proof. Audiences in both London and on Broadway were proving ready to follow him anywhere. Even musicals about cats and, yes, trains were drawing in audiences.

Turning Gaston Leroux's 1909 gothic classic Le Fantôme de l'Opéra (a property in the public domain) into a musical wasn't a new idea—British playwright Ken Hill did it in 1976 by adding new lyrics to classic opera music, and Nine writers Maury Yeston and Arthur Kopit were prepping their own take in the 1980s—and it became a bit of an obsession for Lloyd Webber, who reportedly saw the property as a chance to write a more classic musical in the vein of Broadway inspirations Richard Rodgers and Oscar Hammerstein.

In early 1986, Lloyd Webber teased the show's London premiere set for later that year with a single of the still in development musical's title song (and subsequent now-camp classic music video directed by Ken Russell) featuring Brightman and Steve Harley, the Brit rocker who was originally offered the role of The Phantom onstage as well. Although the video visually gave a peek at Lloyd Webber's vision for the show, the fact that the title track is the only rock song (utilizing heavy metal guitars and an electro-pop beat) in the score left his fans with little hint of the sumptuous score he'd eventually create for Phantom.

So, critics were, as they say in London, gobsmacked when the musical took its opening night bow at the Her Majesty's Theatre on October 9, 1986, and they were presented with the full effect of Lloyd Webber's hypnotic, lushly romantic score. High praise was also heaped on the theatrical vision of iconic American director Harold Prince and his designer, Royal Shakespeare Company vet Maria Bjornson. Although critics entered the theater with preconceived opinions on the leads—Michael Crawford, best loved for his light, comedic performance as the hapless hero of the 1974 musical Billy, and Brightman (a.k.a. The. Wife. as Christine)—both stars were almost universally adored.

A Broadway transfer was announced for late 1987, and the Shubert Organization began sinking a reported $500K into renovating their Majestic Theatre for the show. But producers got into a bit of a public war with Actors Equity Association, which wouldn't allow Lloyd Webber to bring Brightman with the production (Crawford was approved on grounds he was an international star.) The music man insisted on Brightman's casting and even Prince told the union that he had auditioned 92 American actresses and found none that could sing the soprano role and dance on pointe. During months of negotiations, Lloyd Webber threatened to pull the production and rumors floated that he was entertaining an offer from Steven Spielberg, his neighbor at Trump Tower, to make a Hollywood movie instead. Ultimately, a deal was struck, allowing Brightman a six-month run in exchange for Lloyd Webber agreeing to put an American in his next West End musical (he wound up casting two—Ann Crumb and Kathleen Rowe McAllen—in 1989's Aspects of Love.)

Before it opened, Phantom rode a wave of publicity (Lloyd Webber even landed on the cover of Time) and racked up an unheard of $16 million advance, even more impressive when you consider top-priced tickets were just $60. Although it was sold out pretty solidly through the year, a scalper could get you in earlier if you were willing to pay $250 per seat. The show also took the "merch" market to new levels, with a full selection of T-shirts, magnets, mugs with a disappearing mask and even a hardcover Phantom book ready for purchase by "phans."

By the time critics, who had already made a sport out of trashing Lloyd Webber (fruitlessly—Cats had just entered its sixth year), got their hands on it, they were powerless to the show's appeal for audiences. Frank Rich in The New York Times admitted "it may be possible to have a terrible time" at the show, but "you'd have to work at it" while criticizing there was "scant tension or suspense" and ridiculously adding it had only "slightly more plot than Cats." While praising Crawford, Prince and Bjornson, most of the original reviews spent time trying to accuse Lloyd Webber of ripping off the sounds of other composers and proving extremely unwelcoming to the show's fought-for leading lady.

Looking back, what New York reviewers mostly proved was how unromantic a lot they are, clearly unable to open up their minds and let their fantasies unwind, as "The Music of the Night" asks. Howard Kissel in the New York Daily News probably said it best: "When was the last time you heard an unabashed love duet on Broadway? That accounts for much of Phantom's appeal." Although there are great hints of the horror that drives the property's multiple film versions—it was the romance of Leroux's original text that hooked Lloyd Webber and gives the musical its soul. The show is most unforgettable for its moments that are tragic, thrilling and sexy all at once, like the final sequence in which Christine and her lover Raoul battle The Phantom in his lair. Although others have tried to replicate the show's dark vibes (R.I.P. Dance of the Vampires, which sadly featured Crawford) and rich romanticism (The Secret Garden, Passion, Jane Eyre), only Wicked has come closest in combining the two, although its love story is ultimately about sisterhood.

Get to know the show's current stars in the video below!


Critics have eased up on Lloyd Webber in the years since Phantom has become the longest-running musical in the history of Broadway, with his most recent success, School of Rock receiving the best reviews of his career. And he's continued to find real power in romantic scores, with Aspects of Love and his Phantom sequel, Love Never Dies (currently on tour and hopefully getting a go on Broadway soon) arguably even outshining his work on Phantom.

But 30 years in, Phantom is a Broadway institution, and it is still in pristine shape at the Majestic Theatre, where it is led by Swedish theater star Peter Jöback as The Phantom, Mexican-born Rodney Ingram as Raoul and Filipino Ali Ewoldi, the first Asian-American actress to play Christine. It's a testament to true theater craftsmanship, unbeatable word of mouth, powerful marketing and a love story for the ages. Bravi, bravi, bravissimi! Here's to many more.